It so happened that in November 2010, again by pure chance we had another “frozen peas” moment! Anyway, we had another .... a possible building plot in an ideal spot but worryingly the advert was in a self build magazine that was about 6 weeks old so we assumed it had been long sold.

We made an enquiry to be told, surprisingly, that it was still available BUT there were, others interested. However, an issue had arisen over the planning permission thus all negotiations had stalled as the vendor awaited a determination from the local authority legal department.

The question was over the validity of the permission due to the time delay between grant of the permission and "work" on site actually starting. The five year time limit on commencement of the development had lapsed. If this was the case we were given to understand that due to the "green field" location any future application for planning was very unlikely to succeed. We registered our interest and decided to await the outcome.

It was a small site, just 36m frontage by 30m deep. The previous permission was for a 2 bed bungalow but subsequent applications to amend the design and even include a garage had been refused.

The more we thought about it the more we realised that, if the permission was still valid, we didn't want to get into an “auction” type sale, sealed bids or anything like that. We wanted a fixed asking price that we could negotiate. Any other way you can end up offering more than you need or, alternatively, missing out by a few pounds and either would be equally galling. That said, we were very well aware that we would be unlikely to ever find another plot that met all our requirements!

This is the plot on the right complete with previous owners caravan. The fencing denotes the extent of the site. The image below shows the view from the plot we would be overlooking. Note the electricity pole and Yew tree right in line of sight! Note the visibility splay and boundary fencing, the old Nissen Hut had already been removed and the scrub cleared. 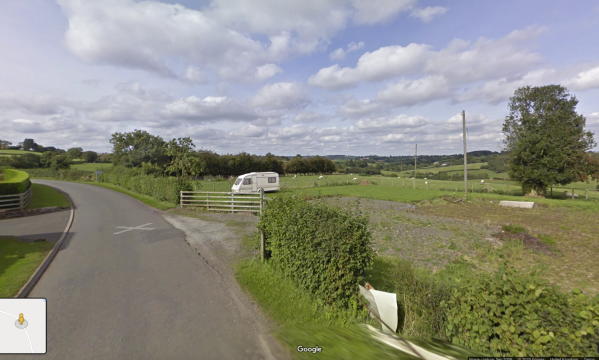 The vendor was a very personable chap called Allan and he kindly provided detailed directions and gave permission for us to visit the site. We set off for a good look around at the first possible opportunity. It was by far the best site we had seen and it ticked all the boxes and the site was level but then the ground fell away quite sharply affording lovely views over a natural valley and to the distant hills beyond.

It was private but not totally isolated being just under a mile from the main road and with pasture land either side. Across the road was a bungalow sheltered by a tall hedge with a number of barns and buildings. So, private but not isolated.

We were assured there was mains water available at the roadside and the deal included a biodigester type septic tank that had been approved for use on the site and was in Alan's garage.

There was an electricity pole right in the middle of the view (and an old large Holly tree) and to make it worse, apparently, the supply to the neighbouring bungalow passed underground right through the middle of the plot and then under the road.

The best views were (and so would the substantial part of any glazing) be North East facing.

Under the local policy in force at that time the planning permission was for a bungalow very similar in proportion to the original dwelling – an old metal "Nissen" Hut (a prefabricated steel structure for military use, especially as barracks, made from a half cylindrical skin of corrugated steel. Designed during WW1 by American engineer Major Peter Nissen). These were also used extensively during WW2. The approved plans, revealed a pretty small timber frame 2 bed bungalow on a footprint of just 14.25m by 7.5m.

We both loved it immediately! No need for a ride on mower but after the house and garage there would be enough space for a reasonable garden with the benefit of open land on three sides that wasn't our responsibility to maintain. Our closest neighbours appeared to be sheep and buzzards with the former undertaking most of the maintenance of the surrounding grassland.

Clearly, even if the permission was still valid, there were still planning issues, the "approved" bungalow really was a bit too small ..... and not of the design we hoped for – we wanted something very contemporary - but we decided that it was only by a couple of meters too small in both length and width.

The question was whether the permission was still live and, more importantly, how the vendor would organise the eventual sale, particularly if there were still other interested parties.

Still the method of sale was not decided so we decided to make it known, if and when the planning was resolved, that we were not prepared to get into a bidding war.

A few weeks later we received the news that the original planning permission was still valid. The rational being that as "demolition" is included in the legal definition of "operational development", and the required visibility splay together with re-fencing had been registered with local authority Building Control then the build had started within the 5 year time limit. There was no time limit on completion.

Thus, we met Allan on site one very cold Sunday early in December 2010. We arrived just before midday and we were late because the car doors were frozen and it took ages to get them open – not the locks but the door seals were actually frozen solid and we didn't want to rip the rubber from the mouldings trying to force the doors open.

We were aware of two others who were interested, one local (who told us the figures didn't add up and examination of the planning file revealed an enquiry from a lady in Essex. Allan told us immediately that she had dropped out and we doubt there are many who would have disclosed that information under those circumstances. 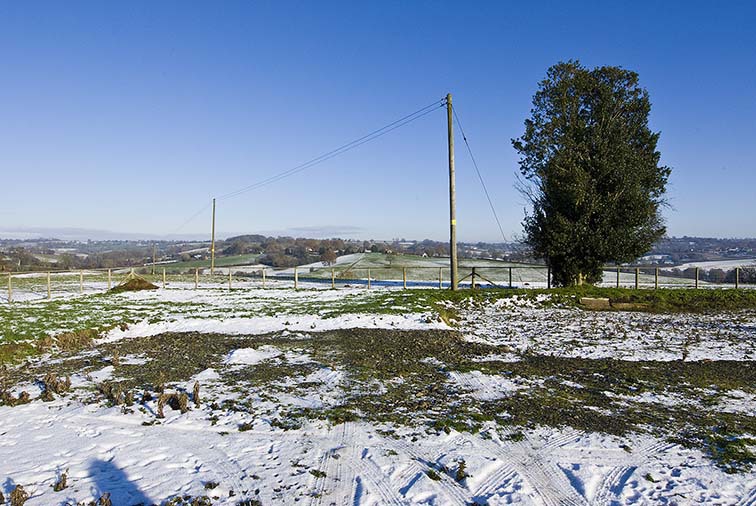 The site included a very offensive electricity pole and holly tree .... the .6m stock fence is the boundary and the plot is just 36m x 30m which is about .25 acre. Proof of the weather that delayed our arrival!

After about 20 minutes of walking round (a very small parcel of land) pushing at fence posts we made an offer well below the asking price and a very long way below our maximum, to which the immediate reply was

At first we didn't believe Allan had heard us correctly,

Bugger, quite clearly we had offered too much first up!

We were aware of, but had not seen, a pub less than half a mile up the road, so off we went to the Three Horseshoes …...... and what a bonus that turned out to be.

Friendly landlord, excellent Wye Valley Bitter (our favourite) and by the smell of it some exciting food as well. Quite obviously we had chosen absolutely the right place to live, a location with a lovely view, quite private, on a rural road and a good pub within walking distance. Beat that!

Over the next few weeks we were in constant email and phone contact with Allan, so if you ever read this Allan, many thanks for your willingness to communicate and for the help and assistance you gave us in providing photos, old documents, contacts and for allowing us access to the plot even before exchange to do a percolation test and dig holes to assess the likely foundation requirements. It was very much appreciated.