Meadowend-build.com
This "Gallery" is intended to be for final images thus the content is quite limited at present. For images of the build in progress please see Blog's 1 and 2.

Blog 2 is the current diary and can be found here!

The drawings below were prepared by RRA Architects of Hereford in support of the planning application for a amended replacement dwelling and submitted in April 2011 and granted on 15 Jun 11, by the full planning committee following officers recommendation. There were three written objections. To our surprise a number of members were very complimentary about the design and what we were trying to do. Thus the planning (following a very useful pre-planning meeting - no longer free of charge) was a painless experience compared to that of many! 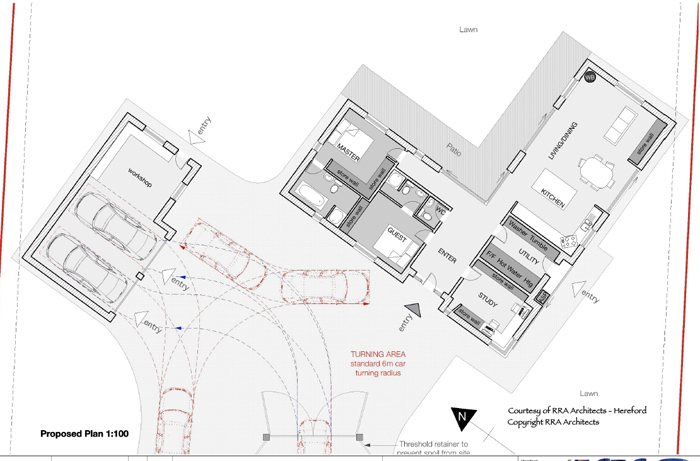 The dwelling is deliberately separated into two wings. The private wing incorporates 2 double bedrooms with ensuite wet rooms and a study. The public area includes a small cloakroom / wc off the entrance hall, and a utility room for the washing maching, freezer and the eco centre. followed by an open plan kitchen / diner / lounge - the latter is an arrangement we have at present and we find it a very sociable way to live. The only problems are cooking smells and noise caused by the extractor fan and general cooking - other than that - it's very comfortable and makes good use of the limited available space without the barriers formed by walls and doors.

As will be seen from the floor plan there is 3m of full height glazing at the end of the south elevation. This has been included. specifically, for the purpose of improving thermal gain. The principal objective in the design was to maintain a modest and incongruous appearance to the South and West elevations as these elevations are seen from the roadside. The overall design including the single pitch roof is intended to minimise the mass of the building. We hope, to the casual observer passing along the road, that the roof will appear to be a normal shallow pitch roof.

The north elevation has a considerable amount of glazing (we hope it will be tripple glazed cost permitting) unfortunatley this is the direction of the view that can been seen on the plot page. It will be obvious from this view that the roof is single pitch.

The west elevation is one of the two elevations (the front of the property) and can be seen from the road thus the relatively modest appearance. The "corner window" on the right is the study window.

The east elevation also has a large area of glazing particularly as it will allow light into the hall / reception area.

Displayed here in an "L shape" whereas it will be located on the site in a "V shaped" orientation. This is (just about) the final floor plan with the re-arranged wc door layout

More drawings and / or photographs to follow as and when there is anything worthy of recording.