The move back to Hereford and our second build project started in 2010-11 was the culmination of a plan formulated over 20 years when we were living in a housing estate (albeit a very nice one) in Werrington to the north of Peterborough. It was a very acceptable new developmen and the location was ideal for travel into London and access via the A1 to the north and west. In truth, we both really wanted to live somewhere rural, hopefully with expansive views, trees and especially hills, however, the latter seemed to be in very short supply in Cambridgeshire!

So, the master plan was that we would eventually move to Ken's home County of Herefordshire. To this end, and way back back in 1989, we decided to start looking for a suitable building plot somewhere in Herefordshire. Given the distance and time involved we didn't have any success at all!

Then by a pure "flook" involving a bag of frozen peas and a road diversion we stumbled across a lovely potential plot in rural Cambridgeshire - some 20 miles south of Peterborough in the village of Great Raveley. 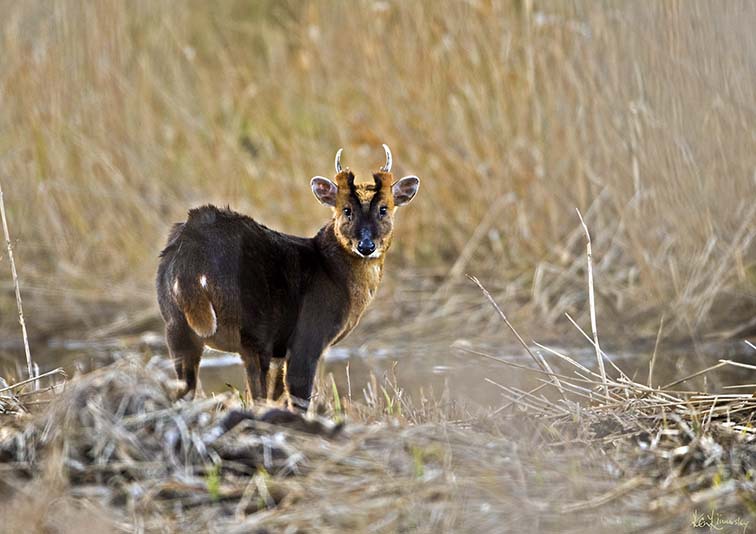 Muntjack Deer at sunrise in Woodwalton Fen  ... mile from home.

The "lovely" potential plot included a totally derelict "two up - two down" single skin brick built property with numerous outbuildings (including bathroom and toilet), as well as an unbelievable quantity of rubbish, including hundreds of suppository wrappers! Parts had been used as a blacksmiths shop and there was evidence of horse leathers and horse shoe nails but not an actual shoe in sight! It came complete with a legal "Notice to Demolish" and outline planning permission for a replacement dwelling.

We assumed the high hedge crossing the site marked the rear boundary but, in fact, it was the hedge of the kitchen garden so it turned out to be double the size we thought initially. Thus, a good size plot, fronting onto a minor road with views to the rear over farmland  ... flat farmland! It was ideal and we realised that, thinking ahead to the move to Hereford, investing in land was a means of keeping pace with the inevitable rise in cost of development land. Thus we decided to try to buy the plot and to do a “practise” self-build. Of course, the goal of moving back to Hereford would remain when work commitments allowed some time in the future.

Negotiations were difficult as every "offer" required the vendors to arrange a "family meeting" but after some weeks we were successful.  So, we sold various belongings, including the car, to raise the £50k to buy the plot. Next we put our house on the market because we couldn't afford to start the new build until we cleared the existing mortgage and arranged a new "self-build" mortgage. Everything was going well to that point but having secured the plot it then took over 12 very frustrating months sell the house.

Meanwhile we consulted with our immediate neighbours about our intentions for the plot and both agreed our plans were a marked improvement on the existing derilict, overgrown and rat infested land.

In spite of a less than encouraging initial response from the local Planning Authority we subsequently secured permission for a Potton Caxton timber frame house with four bedrooms, double garage with workshop, wc and attick room over.

Next, we secured quotes for the demolition and removal of the remains of the existing property which was £2k (in 1992). Then we had the idea of inviting a couple of local dealers specialising in reclaimed building materials to view. They were interested in the roof slates, roof joists, other woodwork and bricks so we sold the lot for £1,800 so that was actually worth £3,800 as we had saved the £2k cost of demolition.

The obvious problem was that by selling our home we needed somewhere to live during the build. We considered the sensible option of renting, but it was too expensive and we also realised it would be useful, if not essential, to be living on or close to the site. Following a chance remark whilst chatting in an accountants office we invested £800 in a very old mobile home that had been "home" to a blind dog! (not a dog for the blind).

We stripped it out, cleaned and repainted the inside, replace all the soft furnishings / upholstery. Whilst it could be a bit cold during the winter, thanks to the electric blanket it worked very well. The bonus was that 2+ years later we sold it for £1,200. So, we recovered our expenditure and lived rent free for 12 months at least.

Our new "neighbours" (on our left) were farmer John “JT” Taylor and his wife Joyce. Many years later they are still our very good friends. On a pre-work site visit one day "JT" quizzed us about where we were going to live when we sold our house. We told him, "on site in a mobile home", and he promptly went on to list all the reasons why we couldn't. His argument made a lot of sense!

The conversation concluded with "Come with me" and JT took us next door to a very secluded farm yard at the back of his house. He very generously offered us a very private parking space, connection to running water and a metered electricity supply! We were then shown two barns, already cleared for our use, one for storage of white good and other non-perishables and the other as a garage for our two cars so we didn't "have to scrape the ice and frost off in the mornings"!

They were brilliant neighbours in every possible respect and the kindness and help they gave us during the 14 years we lived there was incredible. It would need a book to list their generosity, kindness and friendship.

The finished project is here! 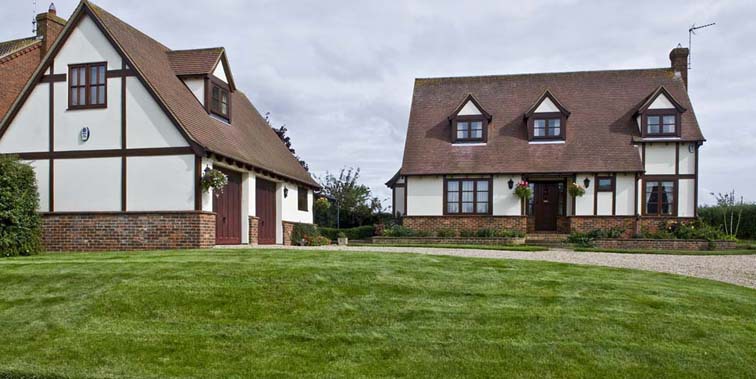 Five years later, following the sudden and sad death of "JT's" “Storm” an old, noisy and very flatulent donkey we bought a small paddock adjacent to our rear garden boundary so Ken just had to have a ride-on mower .... boys toys! 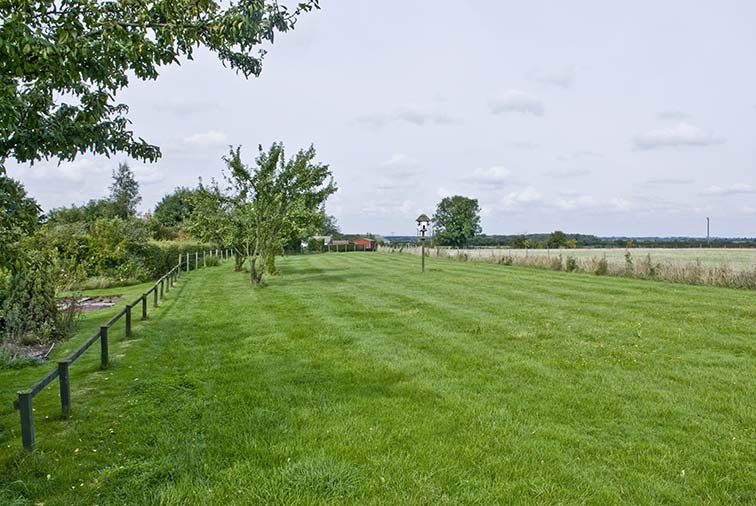 After a few years of 260 mile round trips to "home" football matches Sandy suggested we should buy a small apartment in Hereford to ease travelling and as a stepping stone for our eventual move to Hereford.

Ken objected on the grounds of costs - council tax, rates, mortgage, utilities, insurance,  so, obviously in May 2007, we moved into our new, modern, purpose built and well appointed 2 bed, 2nd floor apartment in Hereford. We just used it as a holiday home and on Tuesday nights when there was a home match.

Then three years later came the catalist that resulted in a dramatic change. At short notice Sandy accepted a job in Hereford with a large drop in salary but with a much better quality of life.

So, now we had to sell "The Old Smithy", in a very depressed housing market. Four neighbouring properties had taken up to 3 years to sell (at greatly reduced prices) so we prepared to move anticipating a regular commute to keep the garden tended and house clean.

We totally de-cluttered the house, prepared to dump most of the existing furniture and put the house on the market fully anticipating 2 or 3 years to find a buyer. We had a minimum price we wanted (needed is a better word) after expenses – so as an incentive we offered the "lads" at the agents 10% of anything they achieved over our target figure.

Incredibly it sold three days before the house was “officially” available for viewing so, sadly, we had to pay the agents a £500 bonus for a settlement in excess of our target figure. We could hardly believe our luck! If you read this David and Louise then we sold too cheaply! Also to confirm, again, that we did not take the house name sign with us!

On our last night there we had pleasure in hosting a party for our friends in the village and to introduce the “incomers” to the locals. Sorry everyone!

We are probably "odd" in that we prefer new properties. We are also quite particular with regard to specification. thus, previous experience told us that we either had to find a new or substantially rebuilt or converted property (Sandy quite fancied a barn conversion) or self build ….. again!

Smallish site (no large garden to be maintained) in a rural location – not on a classified road and within 10 miles of Hereford. Private – but not totally isolated and with views over the beautiful Herefordshire countryside.

We wanted to build a single storey property with single sloping roof plus a separate garage for two cars with workshop all in a contemporary design with lots of glazing overlooking the views.

Minimum of two bedrooms with wet rooms en suite. A study that could double as a third bedroom and a utility room and separate cloakroom. Having learned from the amount on maintenance the old house required we decided to go for low maintenace exterior finish in off-white render, with aluminum powder coated window frames and sills so as to be maintenance free.

the other "must have's" included

Open plan kitchen, dining and lounge area
Underfloor heating (ufh) (essential in our view both in terms of efficiency, comfort and economy)

Energy efficient with emphasis on air tightness, thus the need for ...
Mechanical Heat Recovery and Ventilation (MHVR) system, and

best possible quality glazing as the intention was to have large windows / doors.
Built-in vacuum (a must – for power, convenience and quiet operation) the hose is connected to a wall scoket and all dust is collected in the power unit located in the garage thus reducing noise and dust in the property.
Renewable energy systems, i.e. air source heat pump, solar water and/or pv panels.

Main pressure hot water (no loft tanks)
Rainwater Harvesting - rain collected from house and garage roofing and used to feed all but one toilet flush (emergency use), washing machine and outside taps.
Entertainment systems - Sky Box, radio, DVD player, recorded music all to be contained in a "walk in" cupboard feeding all rooms via speakers in ceilings and wall screens. No dust collecting units under the TV!

No skirting to collect dust but shadow gaps in the plaster walls.
Built in storage (lots of)
Sufficient electrical sockets everywhere
LED Lighting to suit the rooms
LED or low energy lights with spots for pictures / ornaments
Engineered wood floors to living and bed rooms again to minimise dust
Non slip tiles in wet rooms - quality taps and door handles
Zip Tap  - an expensive indulgence. It provides instant "almost" boiling as well as chilled water without the noise of boiling a kettle - essential in open plan living when sport in on the telly!
In September 2010, we started to look (in passing) for a suitable dilapidated property, or conversion, or new build or plot, however, given our list of requirements it will not come as a surprise to learn that we were unsuccessful. We should have realised sooner that with our list of requirements we had to do another self build.